Hello everyone, this is my first and hopefully only post on the forums.

I purchased my Aurora R9 in December 2019, and almost immediately (within the week of setting it up) encountered this issue of the entire system freezing for about 1-3 seconds and making a sort of squeaking sound when it does. Now, when I first noticed this, I thought it was annoying, but maybe it would just eventually go away once I installed the latest drivers on my system... well, it didn't. The freezing typically happens hourly, but sometimes it takes even longer to reproduce.

Note: I've only noticed the freezing when I'm either on my desktop, in File Explorer, or in Google Chrome. I've never noticed this issue while in a game. Windows is installed on my C: Drive (which is an SSD) and all of my games are too.

Fast forward to now, I think I've exhausted pretty much every method of diagnosing my problem that I can do on my end without wiping and reinstalling Windows. Here's a list of everything I've tried so far (I might be forgetting one or two things):

Updating all drivers and BIOS - Nothing Changed

Resting all BIOS settings to factory defaults - Nothing Changed

Monitoring CPU/GPU temps at idle and under load - Normal Temps: 30*C to 40*C Idle, and 60+*C When Gaming (GPU never gets higher then 84*C at the absolute highest, like in a stress test)

Windows System File Checker - First run found one error and fixed it, but the second run found nothing

BIOS Built in ePSA Test - Ran everything except the three hour RAM test, and everything Passed

Uninstalled all programs that could possibly interfere with Windows - Corsair ICUE, Killer Wifi Command Center, ect - No Change and have since reinstalled these programs

I've even tried turning off Bluetooth - Nothing Changed

What Event Viewer, Reliability Monitor, and Task Manager have to show:

I left Task Manager open one day to try to see what was happening during these freezes. Once one finally came, Task Manager indicated a sharp spike in CPU Usage that fell right back down, Here's an image: 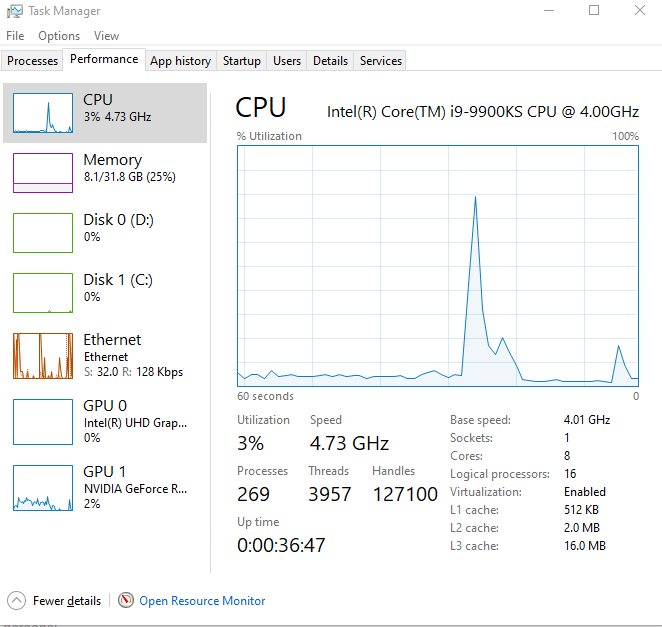 With my luck, that probably means nothing.

In Reliability Monitor, I've only noticed one event that could be a symptom of this issue. Only sometimes when the freezing occurs, the service "Corsair.Service.DisplayAdapter" stops responding. This service is related to Corsair's ICUE software, which I use for the RGB lighting on my keyboard. Obviously this service can only be stopped when ICUE is installed, but even when ICUE wasn't installed, the RGB lighting on my keyboard stutters during the freezes. This is one of the few observable symptoms of the freezing.

In Event Viewer>Windows Logs>System, the only log created during a freeze is "The Background Intelligent Transfer Service was changed to auto start/demand start". I know that the BITS Service is used to download and install updates in the background, but I don't know why this happens during these freezes. I can only guess that my SSD is faulty from this.

The other thing that I could think of before reinstalling windows or sending my PC in is re-seating the memory, because I did take a stick out once to see the branding on it, and maybe I put it back in incorrectly?

Right now, all I can think of is that it's either the SSD, PSU, or Motherboard entirely failing.

(C:) Samsung PM981a 2 Terabytes (Little known OEM version of the Samsung 980 Evo I guess... it wouldn't surprise me if this is dying out.

In the end, I'm sorry that this was so long, but I don't like having to write essays when I'm out of school due to Covid-19, so it's a loose-loose for the both of us. 😀

I know that there's other threads for similar issues to this, but they never end up getting fixed so I figured maybe this could turn into a sort of system freezing mega-thread.

Last thing: Just to give everyone an idea, my PC didn't freeze once while typing this, but as soon as I go onto my desktop to open up something else, I'm sure it will. I hope that we can finally fix this as it seems to be quite common!

On my R9 system, the freezing/lagging seems to be directly related to network or internet activity. For instance, I've mostly noticed it when qBittorent was running or there is a lot of activity with my NES drives. Is it possible the network driver could be the root of the problem?

I've found that my issue's linked to a problematic service at startup. I'm not sure what it is yet because I haven't had much time to really look recently. I'll post back here when I find out the cause of my problem.