Língua EN
Sign In Help
Turn on suggestions
Auto-suggest helps you quickly narrow down your search results by suggesting possible matches as you type.
Showing results for
Search instead for
Did you mean:
Options
Highlighted

I recently purchased a new Alienware Area 51-R2 with a single graphics card. I have three GTX 970s from a previous computer I would like to move over to this new machine. If you order the machine with the triple GTX 980 option, it will ship with a triple Nvidia SLI Bridge like the one shown below. This is a long shot but does anyone happen to know the dell P/N is for this bridge? Contacted support twice, I guess Dell "no longer sells these and searched amazon for a part...". These machines started shipping last month so I know the SLI bridge exists and are serviceable.

Hoping someone from Dell / Alienware can chime in and do a bit of research.
Thanks!

Edit: So according to alienware tech support - the part is GYN70 - manufactured by Nvidia.
The part is not serviceable or orderable according to both Dell/Alienware. I was told by support to just order one from Nvidia.

I would hope these tech people are properly trained because the Nvidia 3 way SLI spacing is NOT the same as what the Area 51 R2 is using. Very disappointing.

Edit: The stock area 51 R2 motherboard spacing is 3x 60mm.
Most 3way SLI connectors are 3x 40mm. I can not find a single 3x 60mm connector - thus making it impossible to upgrade to 3 video cards. 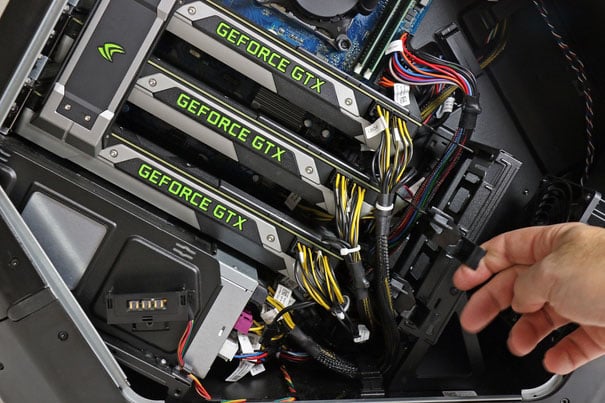 If you need to have a temp Tri SLI conector get 3 Sli Flex Cables and just criss crosss them Dig card to card works like a charm ! Be sure there the extra long ones Micro Center has them all the time.....

Has anyone else had a problem configuring the third card in sli.. on my desktop it shows 3 cards. But when i activate 3d performance it it only links 2 of the 3 in sli. Do i have to delete all my nvidia drivers and redownload the latest, or am i missing something? Thanks

Someone may be able to debunk this but its what I did to get mine working.

Hey Chris, hope you are well. ive now got an R2 and after the 2 way SLI bridge

I'm in the UK and struggling at the moment - from the forum I got the parts numbers - 40NMJ.....Dell UK directed me to www.upgrade.co.uk but they don't seem to have it.  Any help is appreciated 🙂

can anyone in the US or australia, or singapore help me purchhase the 40NMJ sli bridge and HPDD5 pci cable ?...

For both these parts you can just call customer service at dell and order with the part numbers you provided. Or you could buy the bridge directly from nvidia for much less unless your adding a third card. The part you have listed for the bridge is a spaced sli bridge from nvidia fo $30 USD Or $60 from dell. The cable is a different story. You can get it from dell but you'll need order 2 because they dont bundle them. Or if you dont mind them being different then you should be able to find them online at cooler master or similar site. Hope that helps.

I should have said that  the 3 way spaced sli bridge is dell part # GYN70 and can only be purchased from builders.

from what i heard the nvidia bridge is spaced 40mm, while the 40NMJ is spaced 60mm. correct me if im wrong.

i contacted all dell in asia pacific, i live in indonesia so dell indonesia is the first one i called, all of them said those parts are not available for asia region. so no way for me to buy them. unless i have someone in the US or ausstralia region buy them for me and ship it to indonesia.

On nvidia's website they have 2 versions of the 2 way sli bridge 40mm and 60mm. And i believe they ship world wide.

. As long as you dont need the 3 way sli bridge that is 60mm you should find it here.