Hey everyone, I have a hobby of flipping computers, and am doing a very low cost gaming PC build. For this build I bought a bundle that included an Intel Core i5-2400, 4gb ram, a Dell 0GDG8Y (inspiron) motherboard, and a standard Dell cooler. I replaced the 2x2gb ram stick with 2x4gb sticks.

Upon startnig up the computer, the CPU fan get absurdly loud, but eventually tones back down.
Basically, this is really obnoxious and it happens in windows too.
I've found out this:
When my CPU get's to around 30% usage, the fan gets loud.
When the fan it quiet, it spins at about 700-800 rpm.
When it's loud, it spins at about 3000-4000 rpm, sometimes more.
In the BIOS this computer passed all the tests, except for the "case fan" test. I have a 120mm blue LED fan connected to the front 3 pin connector, and an 80mm connected to the 3 pin on the back of the board.
I've tried setting a fan curve with SpeedFan and MSI afterburner, none of them seem to work.
I can't find a setting in BIOs to adjust the fan speed.
I can get the fan to only run at ~700 rpm in speedfan, nothing else. This is quiet but not enough to cool my CPU.
I've tried 4 different fans that i've had spare and they all have the same problem.
I've even bought 2 of these combos, both have the same issue, which leads me to believe it's not an issue with the motherboards being damaged or whatever.
Any idea how to fix this? I'm getting very desperate and don't want to go over budget.
Here's my full system specs:
i5-2400
EVGA GTX 670 FTW 2gb
8gb DDR3
Dell 0GDG8Y Motherboard
Standard Dell cooler
Rosewill Ranger M case
EVGA 600 W1 power supply
500gb Dell 7.2k RPM 32mb Hard Drive

Is this motherboard from either an Inspiron 620 or a Vostro 260? What version of BIOS is installed? The latest version for the Inspiron 620 and Vostro 260 motherboard is BIOS MS-A08 which, quote: "Fix system will have some fan noise with some particular situations." 🙄

Dell OEM CPU fans are typically wired differently from after-market fans, to allow BIOS to control fan speed. So that may be part of your problem.

Since you do this as a hobby, is it safe to assume you applied fresh thermal paste between top of CPU and bottom of heat sink?

What version of Windows?

High velocity CPU fans at boot can be related to delayed or corrupted video drivers so look for an update from EVGA.

And do you have the latest Intel chipset installed?

Dell fan wires are swapped round.

BLUE IS PWM YELLOW IS TACH

Several Dell models have jumper magic.  Depending on which cables are attached it will say its Vostro or Inspiron or XPS aka Vostro 460/XPS 8300   Y2MRG for example.

Will also have Front panel Disconnected errors when cables are not attached.

620 Front panel with Jumper so it says IM an inspiron not Vostro. 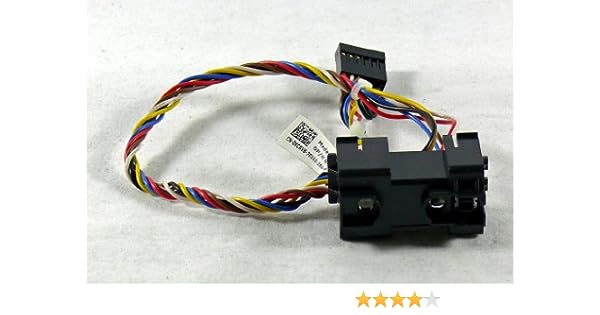 Oh wow. Sorry. I didn’t see any of these replies! It’s my first time posting on this site haha.

So I talked with the ”tech experts” and they basically said “get an OEM fan,” which I have noticed that the wired on my fan are the standard layout, not the wacky dell one.

So do you guys now where I can buy an OEM heatsink and fan?

Just Google for either Vostro 260 or Inspiron 620 heatsink and fan...

also, about that front IO thing you were talking about, can you elaborate on that? All I connected was the power button switch. Nothing else.

Also as a follow up question for all of this, my front case fan is connected to the 3 pin on the motherboard and it only turns on sometimes. If i restart the computer from windows it won’t turn back on too.