Língua EN
Sign In Help
Turn on suggestions
Auto-suggest helps you quickly narrow down your search results by suggesting possible matches as you type.
Showing results for
Search instead for
Did you mean:
Options
Highlighted

Neither the Dell Power Manager, nor the Dell Website are offering any recomendation for an replacement and even the whole Internet is just offering a couple of highly questionable traders for this type....

Is there any compatible Dell Akku I could use as an propper replacement? It would be pretty disappointing if such a huge company as Dell would simply let down it's customers after 2 years...

Thanks for any help!

I have a Samsung battery on my system.  I notice I have a utility Dell Power Manager lite and it has a link to order a new battery, which I haven't tried.

Just a note, make sure the power connector is fully inserted.  Having even a small part of the barrel showing can cause connection problems.

Did you run a Battery Report for that battery?  I got my system about the same time you did but I use it very little.

I waited for two years without success for Dell to supply such a battery. I called Dell, emailed Dell, chatted with Dell but to no avail. I did not want to buy online from unknown / dodgy dealers & I did not particularly want to buy a copycat battery because it might only last a short time.

Fortunately, Amazon UK started selling a genuine Dell 33YDH last November. I bought one and it seems to be the real thing so I am pleased. www.amazon.co.uk/Dell-Inspiron-Latitude-Primary-Battery-Black/dp/B07KSD4NZ6

The seller was [unknown Marketplace seller] 'Gemstar' but it was a fulfilled-by-Amazon sale so I could be confident that I would not be fobbed off with rubbish yet have no means of resolving matters.

If you are not in the UK then your local Amazon site might also have started selling these.  I could not find an equivalent entry in amazon.com though.  International postage for buying directly from Amazon UK might be quite nasty.

{Accidental additional reply.  I've left it in because I added some info to it that was not in my initial reply.}

I do not know which country you are in; my links are for Amazon UK.

I was not able to find any other Dell reference to any equivalent battery type despite wasting six months of my life calling & emailing them.

I was finally able to buy a genuine Dell battery from a reliable source after two years searching - sold by Gemstar, fulfilled by Amazon.  Since Dell did not regard users as important enough to deserve a new battery, I looked to find one that was either sold by or fulfilled by Amazon so that I could be confident there would be somebody to hold to account if it proved to be a dud.

The general link is Inspiron ... 7779 ... 56Wh 4-Cell Battery ... 33YDH but, since all I know is that the seller Gemstar provides a genuine Dell battery, here is a link directly to that Amazon Marketplace seller's version of the product page Inspiron ... 7779 ... 56Wh 4-Cell Battery ... 33YDH [sold by Gemstar, fulffiled by Amazon]   The other sellers might be alright for all I know but, equally, they might not.

My sold by Gemstar, fulfilled by Amazon battery is genuine and is of good quality.  It was identified as a genuine Dell battery both by the Dell PowerLite utility and by its responses to the Windows command

PowerCfg -energy -duration 0 -output EnergyReport.html {run in a Cmd window after changing to a convenient folder so that the output file is dumped there}

This battery also has all the correct screwing-in points.  I have seen several Amazon user reports about 'equivalent' third-party batteries not matching them all so this reinforces my belief that it is genuine.

The battery is still going strong after its first year's {light} use.  I have been using external powerpacks as sacrificial items so I wear them out instead of the battery itself. 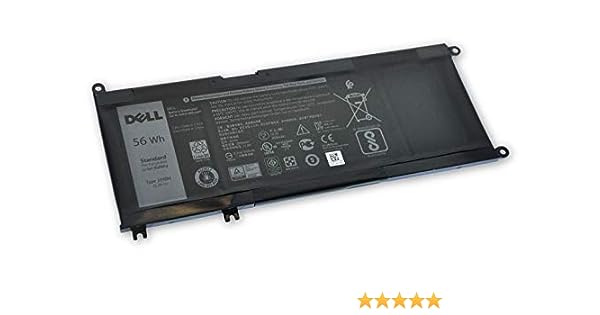