Houston is one of over 25,000 municipalities that works with a civic tech company called SeeClickFix to address pesky community issues and inspire a positive relationship between civilians and local representatives.

Founded in 2008, the New Haven-based social enterprise enables people to quickly report local disturbances, such as troublesome potholes or illegal dumping, to the appropriate government bodies through an app on their mobile device. According to its website, SeeClickFix has helped local citizens fix over three million minor quality-of-life issues.

“During the storm, we started to see the flooding emerge,” CEO and co-founder Ben Berkowitz said. As the storm continued to progress, SeeClickFix was overrun with images sent by citizens through the City of the Houston 311 app, run by SeeClickFix.

“Some of the photos were disturbing,” he lamented. “[It was] everything from heartbreaking property damage to photos of livestock drowned in the backyard.” 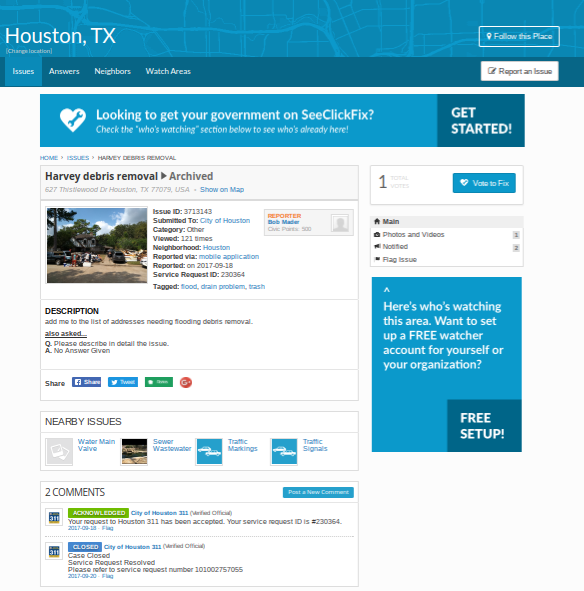 As the reports from flooding to street hazards rolled in through the mobile app, the images revealed Hurricane Harvey’s power in real time. Queries included all of the information a call center or other governmental body would need to respond, such as location and category.

“And then there were the serious requests,” said Berkowitz. “People were saying, ‘okay, we’re in the attic now. We’ve punched a hole in the roof, we’ve stuck a white towel out of the roof.'”

The idea behind SeeClickFix came to Berkowitz in 2008 from his personal frustration trying to contact governmental officials, and the lack of process for following up on services like fixing potholes and trimming trees.

The company quickly garnished media attention for its tech-centric citizen narrative, featured in publications from The New York Times and The Washington Post to NPR and a Mashable article by Craig Newmark, the “Craig” from Craigslist.

One of the first platforms to take advantage of GPS capabilities in smartphones, SeeClickFix quickly became a leader in the movement to use technology to pinpoint and address local civic problems to the appropriate local officials.

In 2012, Berkowitz was invited to the White House for a Forum on Citizen-Based Innovation to discuss his work with SeeClickFix and the growing civic tech movement. And in 2013, he was listed as one of 10 “Young Agents of Change” by PBS Newshour.

Key to Berkowitz’s notoriety has been his understanding of the importance of technology and social media in civic engagement. Although the concept of civic tech—technology used to empower citizens and improve the governmental efficiency—has been around for decades, Berkowitz believes that several factors have altered the way citizens interact with their government.

Among them are the dramatic rise in smartphone adoption, a growing desire for governmental transparency, and the role of social media in reporting local issues.

Based on SeeClickFix user behavior, it is clear that a growing number of civilians are comfortable using social media to report both political and practical issues. The mobility of smartphones, particularly vital for disaster-related issues, can be reported even when the power is down, and GPS capabilities make it easy to determine the user’s location.

On SeeClickFix, in addition to people easily documenting problems via their smartphone camera and pinpointing them via GPS, they can also post their reported issue to Facebook through its built-in integration, bringing an element of social awareness into the mix.

“It takes less than 30 seconds to document [an issue],” Berkowitz explained. For Berkowitz, this transparency through social media is part of what makes SeeClickFix so relevant today. In no other place was this more apparent than in Houston.

“That is incredibly powerful when some other resident comes to the platform for the first time and sees that the city of Houston is responding,” he said.

“People are speaking up in a constructive way. They have gone from a place of frustration where they are not speaking up because they don’t believe anything will be resolved, to communicating effectively with the government during an emergency.”
— Ben Berkowitz, CEO and Co-Founder, SeeClickFix

A New Era of Civic Trust

It is this new transparency between individuals and their government officials—enabled through social media and technology—that Berkowitz believes will lead to a change in how people view their local government.

“You can actually see the individual request and the [government] follow-up to that request,” said Berkowitz. “And people can follow along with that request—it is social and engaging.”

According to Berkowitz, the most valuable aspect of civic technology is its ability to reshape the relationship between civilians and their government officials. This means more accountability for governmental offices and a newfound respect from citizens who reap the benefits of their action.

“People are speaking up in a constructive way,” said Berkowitz. “They have gone from a place of frustration where they are not speaking up because they don’t believe anything will be resolved, to communicating effectively with the government during an emergency.”

People are now realizing there are good people in the government, Berkowitz went on. “It is a real cultural shift.”

In the wake of natural disasters, citizens are also realizing the importance that government plays during and after natural disasters. In 2012, SeeClickFix partneredwith Huffington Post to aid with disaster reporting for Hurricane Sandy and to help citizens with cleanup and transportation post-storm. In 2013, after Nemo, the blizzard that took the East Coast, SeeClickFix reports were responsible for getting local municipalities to plow the road in time to get an expecting mother to the hospital to deliver her baby.

Leaning in to Civic Engagement

For Berkowitz, one of the added benefits of his work with SeeClickFix is witnessing the way the technology has not only inspired a positive relationship between local government bodies and their constituents, but also the way it’s shaped civic behavior at large.

In St. Petersburg, Florida, positive relations between officials and residents have inspired citizens to proactively report smaller issues, such as loose debris or a flooded drain, that may be a disturbance to others in the community.

From where Berkowitz sits, it seems publicly documenting issues not only resolves problems, but also encourages better behavior. He called out a situation in Sarasota whereby a user felt compelled to clean out a city drain right before Hurricane Irma hit.

“You see this kind of behavioral shift where the citizen is leaning in,” said Berkowitz. “When it’s being documented on the web, it can be infectious.”

And in the case of disasters like Hurricane Harvey, it can also save lives.