The purpose of this blog is to provide valuable performance information for BWA-GATK pipeline benchmark with Dell EMC Ready Solutions for HPC BeeGFS Storage. Unfortunately, we were not able to setup enough compute nodes and BeeGFS storage large enough to compare to the previous performance results published for a Lustre storage. However, the results will be helpful to estimate the amount of computational resource for a given variant calling workload.

The test cluster configurations are summarized in Table 1.

The test data was chosen from one of Illumina’s Platinum Genomes. ERR194161 was processed with Illumina HiSeq 2000 submitted by Illumina and can be obtained from EMBL-EBI. The DNA identifier for this individual is NA12878. The description of the data from the linked website shows that this sample has a >30x depth of coverage, and it actually reaches to ~53x.

A typical way of running NGS pipeline is to process multiple samples on a compute node and use multiple compute nodes to maximize the throughput. The number of compute nodes used for the tests was eight C6420 compute nodes, and the number of samples per node was seven samples. Hence, up-to 56 samples are processed concurrently to estimate the maximum number of genomes per day without a job failure.

As shown in Figure 1, single C6420 compute node can process 3.69 of 50x whole human genomes per day when 7 samples are processed together. For each sample, 5 cores and 20 GB memory are allocated. 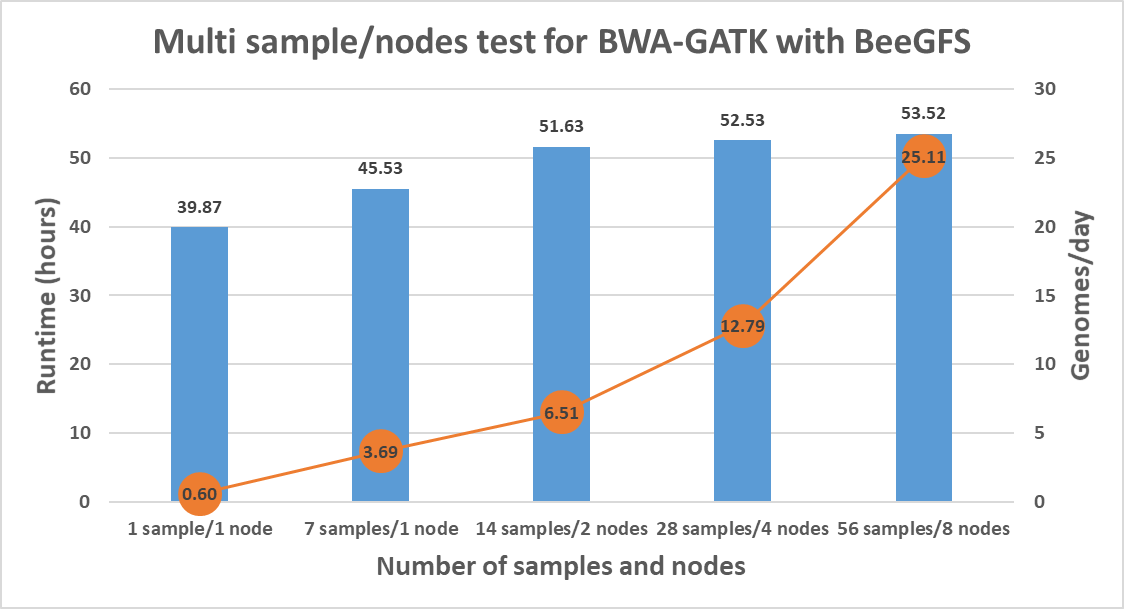 56 of 50x whole human genomes can be processed with 8 of C6420 compute nodes in ~54 hours.  In other words, the performance of the test configuration summarizes as 25.11 genomes per day for whole human genome with 50x depth of coverage.

As the data size of WGS has been growing constantly. The current average size of WGS is about 55x. This is 5 times larger than a typical WGS 4 years ago when we started to benchmark BWA-GATK pipeline. The increasing data size does not strain storage side capacity since most applications in the pipeline are also bounded by CPU clock speed. Hence, the pipeline runs longer with larger data size rather than generating heavier IOs.

However, more temporary files are generated during the process due to the larger data needs to be parallelized, and this increased number of temporary files opened at the same time exhausts the open file limit in a Linux operating system. One of the applications silently fails to complete by hitting the limit of the number of open files. A simple solution is to increase the limit to >150K.

The results in Figure 1 shows that the throughput tests did not hit the maximum capacity of the system. Since there was not any sign of significant slowdown by adding more samples, it must be possible to process more than 7 samples if compute nodes are setup with larger memory. Overall, the BeeGFS storage is a suitable scratch storage for NGS data processing.