This article describes how to enable SR-IOV functionality on Dell™ PowerEdge™ servers.

Significant research and development effort in virtualization technology has been expended to increase the effective hardware resource utilization. Virtualization has helped improve hardware utilization tremendously, but its potential to fully maximize I/O devices and technologies has not yet been realized. Software-based sharing of hardware resources adds overhead to each I/O operation due to the emulation layer between the guest driver and the I/O hardware. To address this issue, PCI-SIG, the special interest group that owns and manages PCI specifications as open industry standards, introduced a suite of specifications for Single Root I/O Virtualization (SR-IOV) to allow multiple operating systems to share a physical interconnect.

Both Virtualization Technology and SR-IOV Global settings need to be enabled in the BIOS. The steps to enable both are as follows:

1. Update the BIOS to the latest version.

11th Generation servers: Press ESC  to go to the previous menu and one more ESC to save the settings

12th Generation servers: Press "Back" to go up a menu then click "Finish" and "Yes" to save settings. 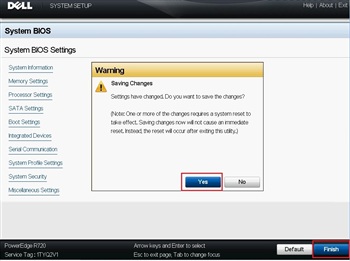 Below is a list of Dell 11th Generation platforms that support the SR-IOV feature: