An introduction to DisplayPort and the various connectors.

Article Summary: Guide on what DisplayPort is and the features and connection options. 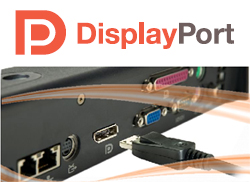 
This new interface is currently designed to work along side of the proprietary digital visual interface (DVI) used between the PC and an external display, as well as the legacy low-voltage differential signaling (LVDS) interface used inside notebook computers, monitors, and TVs to connect to LCD panels. As DisplayPort becomes more readily available, eventually it will replace VGA, DVI, and LVDS as the display interface standard.

The DisplayPort has the capability to provide a scalable digital display interface with optional audio and high-definition content protection (HDCP) capability for broad usage within business, enterprise, and consumer applications. The interface is designed to support both internal and external digital display connections. Examples of external applications for DisplayPort include display connections between PCs, monitors, and projectors.

Advantages over DVI, VGA and FPD-Link:

The DisplayPort interface accommodates both PC and home entertainment applications and does so at a lower manufacturing cost. The table below shows a comparison of display interface connectivity.

If you require further assistance or wish to give us feedback, please engage our technical team on Twitter.