Making SSD the boot/OS drive and HDD the storage drive

Just bought an 8930 i9 with the standard 1 tb 7200rpm HDD. I'm trying to add a 1tb Samsung NVMe M2 970EVO SSD. Want to make the SSD the boot drive and the factory HDD storage drive, like so many people on the board. Haven't been able to do it. Dell technical support is telling me I can't set it up that way. What???

- Installed the SSD... ran into a problem because the system was configured as RAID. Read on this board how to change it to AHCI by others who have done what I'm trying to do. That worked.
- Ran Samsung Magician Software to set up the SSN, updated the driver. Everything looks fine.
- Cloned the HDD to the SDD

- Rebooted/F2 into BIOS. Can see the SSD listed on the Main page.
- Went to Boot tab/boot options. The SSD isn't there.

in Disk Management, SSD (Disk 1) was listed as offline because (I assumed) it's in conflict with the HDD (Disk 0). I right-clicked it to bring it online, and it was assigned Drive letter OS E: I can see in File Explorer, it's an exact copy of OS C: (the factory HDD)

Called Tech Support for help. They said I can't set it up like I want because the system is configured at the factory as RAID and simply won't work the way I want it to. WHAT??? They wanted to charge me to set it up as a single drive SSD, and said the factory HDD won't work any longer.

I'm reading all over this board about people who are doing EXACTLY what I want to do. Have wasted hours trying to get this to work. The SSD is recognized in the system. And there it sits. Really frustrated. Don't know what to do. Couldn't believe his information was accurate. No where in any sales documentation, did it say this ships in some sort of RAID-only configuration. I even read the service manual before I purchased. The tech couldn't tell me where that was pointed out for buyers. Who buys a high performance computer that locks you into the seller's pre-selected RAID configuration?

I'm totally stuck. Any help would really be appreciated. Thank you! Billy

It sounds like the PC is still booting from the HDD. So have you tried disconnecting that drive from the SATA port, clearing BIOS by removing the battery and pressing/hold power button for ~30 sec before reinstalling the battery, and then trying to boot from the SSD?

I agree with what @RoHe wrote. You didn't say what software you used to clone the HDD to the SSD. If you had use Samsung Data Migration software, one of the final steps after cloning is complete and your computer is shut down is to remove the Source Disk and connect the cloned Target Disk. One other thing you could have done is to boot using F12 and select the SSD from the Boot Menu that appears. In the Boot Menu, if you did not disconnect the HDD you would be presented with a choice of booting from the SSD or the HDD.

Regarding the RAID setting. In the BIOS, SATA Operation is set to RAID (by Dell). So Windows is installed on the HDD in RAID mode. It appears that you changed the Windows installation on the HDD to AHCI by running this procedure: http://triplescomputers.com/blog/uncategorized/solution-switch-windows-10-from-raidide-to-ahci-opera.... Next, when you cloned the HDD to the SSD, the SSD should have the AHCI drivers. If you did all of this in this order you should be fine.

if you disconnect the HDD and everything works, at some point you will need to re-install the HDD so that you can re-initialize it to use as additional storage. When you install the HDD, you will have to use the F12 Boot Menu to boot from the SSD. To re-initialize the HDD using DiskPart, use this procedure: https://macrorit.com/partition-magic-manager/initialize-disk-gpt-mbr-from-cmd-diskpart.html. With the DiskPart command "select disk" make sure you are selecting the HDD.

Hi Ron. Thank you very much for the reply. I see you've helped a lot of people here.

Not being very techie, I haven't tried the process you suggest. I had previously installed a SATA SSD, and made it the boot/OS drive in the old Dell 8500 I'm replacing with this 8930 and everything went fine.

Reading through a bunch of posts here from helpful people, I think I might have taken a step or two out of sequence when attempting this. I "thought" I knew the way because I had done it one other time with a Samsung SSD -- just a different form factor.

Other than this attempt to install the NVMe SSD, and changing RAID to AHCI in the BIOS SATA settings, I've done nothing else with the computer since the unboxing. I'm thinking maybe I should restore everything to factory settings on the HDD with a recovery USB I created before I did anything else. I would remove/reformat the SSD so it's "factory fresh,"  and start over from square one.

If you restore the HDD using your USB backup, you're going to have to reset BIOS to RAID because that's the way Windows is set up on your backup.

Do you mean reset the BIOS to RAID, BEFORE I reinstall to factory fresh from the recovery USB? Thanks so much.

Thank you Vic384. I'm trying to work through all this. I think I did something wrong from the outset. While the SSD shows up on the main tab of the F2 - BIOS, it does NOT show up in the F12 Boot Option menu.

Thinking of returning the square one and starting over. I did see Ron's reference to your note about the RAID vs. AHCI issue if I reinstall from a factory-fresh recovery USB I created before venturing down the path of trying to install this SSD.

BTW, it's a Samsung NVMe, and I'm working with Samsung Data Migration and Magician. Thank you very much for your help!

@BillySea86  I am curious why SSD does not show up in the F12 Boot Menu. When you were in Disk Management, did the Disk 0 (HDD) and Disk 1 (SSD) have all the same partitions? Is other words did you clone the entire HDD and not just the OS partititon?

I don't know why it doesn't show up. I used Samsung Data Migration to clone the HDD to the SDD. It didn't give me any options of what to clone, so I assume it cloned the entire thing, although I'm not sure. Below (i hope this works) I'm embedding a screencap of my disk management window. Currently the computer has assigned the drive letter E to the SSD. 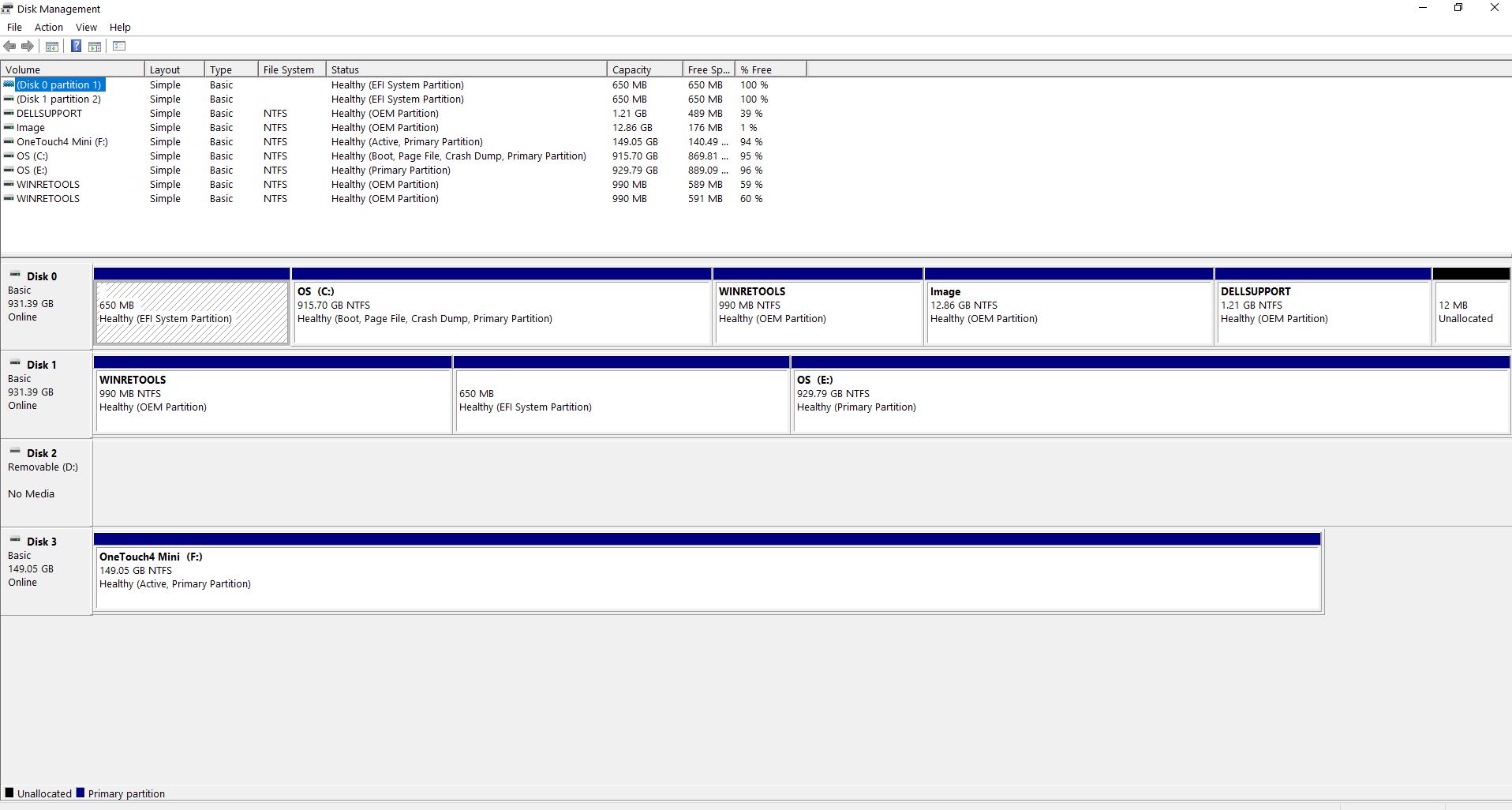 New development. When last I checked, the SSD didn't show up in the F12 Boot Menu options. Now it does! 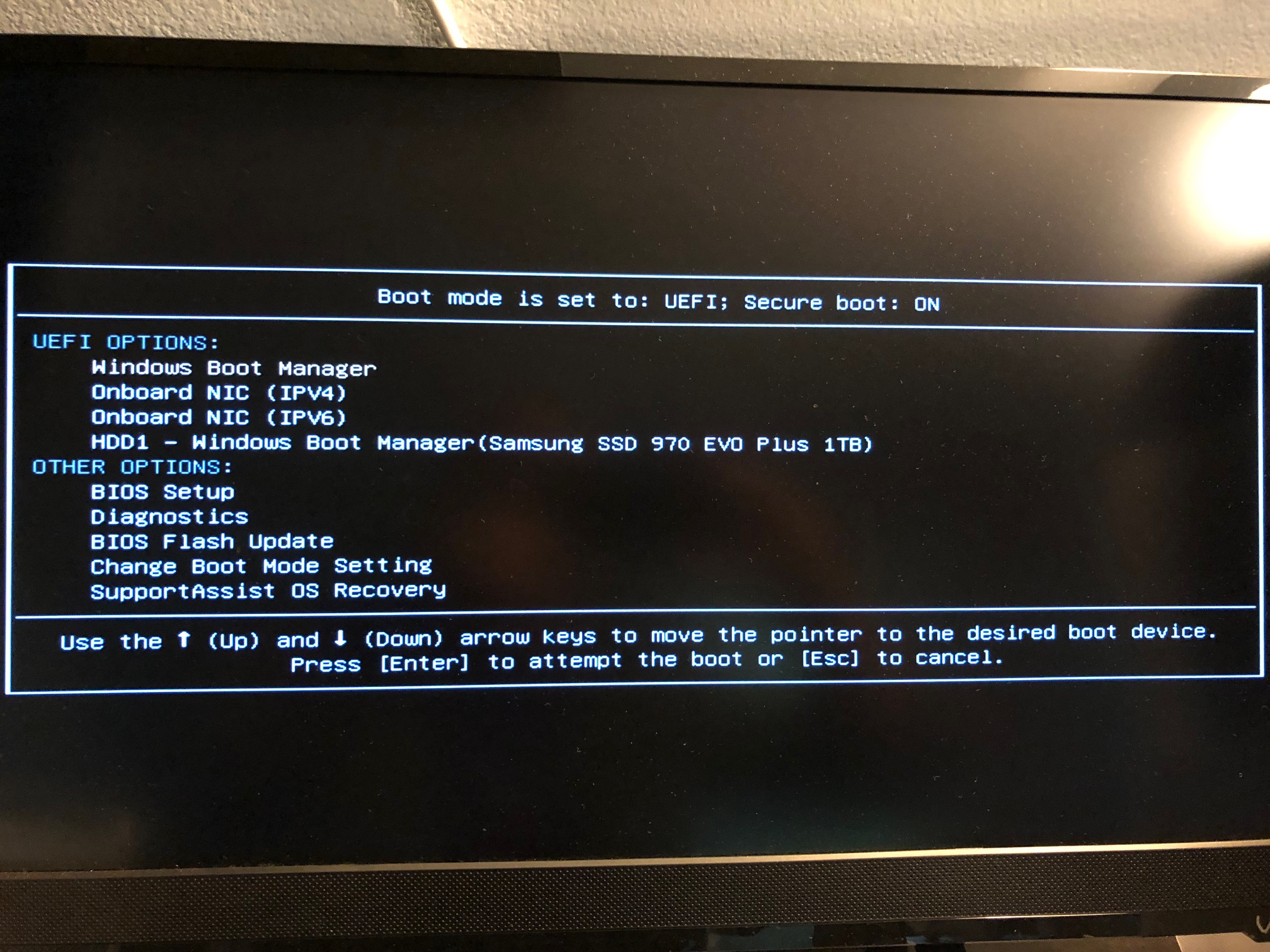