Options
Turn on suggestions
Auto-suggest helps you quickly narrow down your search results by suggesting possible matches as you type.
Showing results for
Search instead for
Did you mean:
Last reply by bonovski 08-20-2018 Unsolved
bonovski
2 Bronze

First I updated the BIOS to 1.6.1 which was the latest available a couple of weeks ago.

Curiously it's been pulled since then, the latest available BIOS now is 1.5.1.

After that I updated the video driver and the banding issues occurred on the external monitor, the built-in is fine.

It works OK with the old video driver, but windows keeps updating it to the latest one.

Thanks for posting.  Apologies that your monitor is not working as expected with your XPS 9350.

Please post some pictures or video showing us exactly what you mean by banding. Also post some specific data on how it was connected.

Then tell us what resolution and Hz the U3415W is set to using the above example.  Thanks. 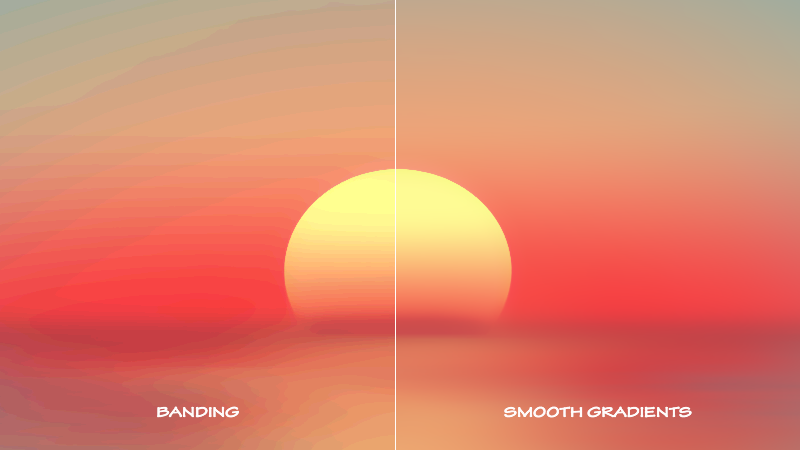 The gradients are not smooth. It looks like the driver is sending an 8bit image to the monitor.

Both monitors are at 60Hz and 32bit, at least that's what the driver says.

These issues only appear with the latest Intel video driver available on the dell support page (december release). The older drivers are OK.

The main issue seems to be the buggy TB3 firmware and/or BIOS combined with the video driver,

I also own a U2718Q and a U2715H and use my mac predominantly with these two, no issues whatsoever.

When I connect the 9350 to these two monitors I noticed another issue. Every 5 minutes or so the screen goes black for half a second.

In this case, you should remove that December driver and reinstall the older working one. Then check back later to see if we released a newer driver after the December release. Then test it.

Has this issued been fixed?  I still have the problem on two separate TB16 desks.  No Gradient problem on the Precision 7720 screen, but when plugged into the TB16, the screen running off the TB16 suffer a colour gradient problem.

Hi, I tested all the newer drivers available, the dell one's and the original intel one's, the issue still persists.

Will this issue be addressed in the near future, because the old driver is now causing problems when waking up from sleep, crashing Office etc.

I'm having the exact same issues - color banding is driving me nuts. I'm having the issue on the Dell U34 external, and the Dell XPS15 screen looks fine. All the settings look fine for the monitor, I haven't changed anything. Not sure when the color banding started to appear but it wasn't like this originally. Must be an updated drive issue. Did you roll back the driver to get it to work? If so, which one?