Cascade Lake includes hardware mitigations for some side-channel vulnerabilities. It is expected that this could improve performance on storage workloads, look for future studies from the Innovation Lab.

Since Skylake and Cascade Lake are socket compatible, the processor tuning knobs exposed in the system BIOS are similar across these processor generations. The following BIOS tuning options were explored in this study, similar to work published in the past on Skylake. 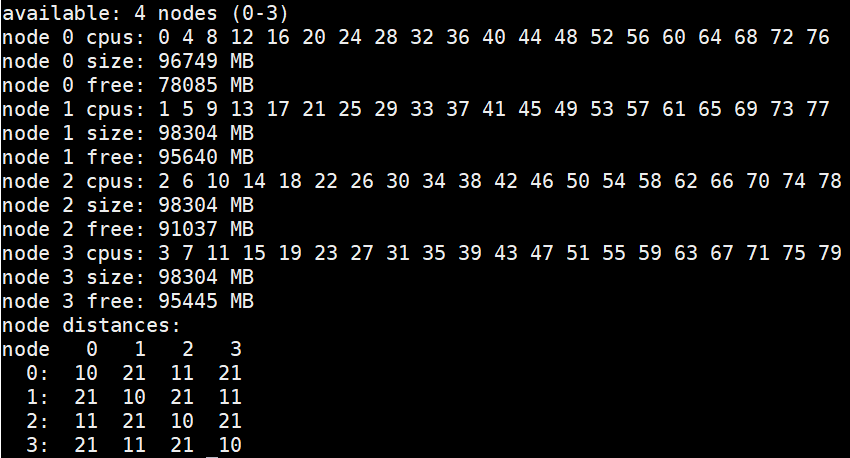 The system profiles are a meta options that, in turn, set multiple performance and power management focused BIOS options like Turbo mode, Cstate, C1E, Pstate management, Uncore frequency, etc.  The different system profiles compared in this study include: We used two HPC benchmarks and two HPC applications to understand the impact of these BIOS options on Cascade Lake performance. The configurations of server and HPC applications used for this study is described in Table 1 and Table 2.

All the results shown here are based on single-server tests; cluster level performance will be bound by the single server performance. The following metrics were used to compare performance:

Figure 3 compares the result of STREAM across the different BIOS configurations.
The graph plots the Memory bandwidth in Gigabytes per second obtained while running STREAM Triad. The Memory bandwidth (GB/Sec) obtained is plotted on y-axis, higher is better. The BIOS configuration associated to specific values of Gigabytes per second are plotted on the x-axis.
Below are the observations from the graph: 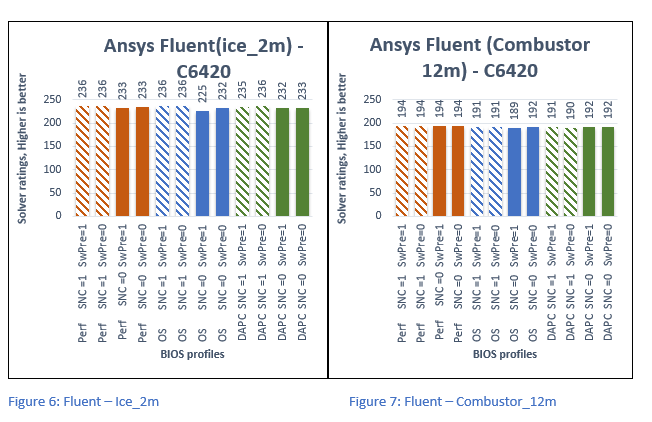 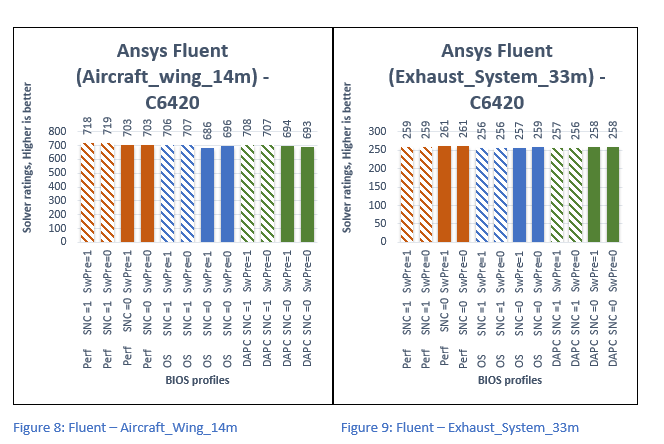 Figure 6 through Figure 9 plots Solver Rating obtained while running Fluent- with Ice_2m, Combustor_12m, Aircraft_Wing_14m, and Exhaust_System_33m dataset respectively. The Solver Rating obtained is plotted on y-axis, Higher is better. The relative profiles associated to specific values of Average time are plotted on the x-axis.
Below are the overall observations from the above graphs:

In this study, we evaluated the impact of different BIOS tuning options on performance when using the Intel Xeon Gold 6230 processor. Observing the performance of different BIOS options across different benchmarks and applications, the following is concluded: It is recommended that Hyper-Threading be turned off for general-purpose HPC clusters. Depending on the applications used, the benefit of this feature should be tested and enabled as appropriate.

Not discussed in this study is a memory RAS featured called Adaptive Double DRAM Device Correction (ADDDC) that is available when a system is configured with memory that has x4 DRAM organization (32GB, 64GB DIMMs). ADDDC is not available when a system has x8 based DIMMs (8GB, 16GB) and is immaterial in those configurations. For HPC workloads, it is recommended that ADDDC be set to disabled when available as a tunable option.