Newer Dell computers, such as the Latitude XX90 series laptops are unable to boot to internal boot devices when in Legacy boot mode.

With the Boot option set to Legacy boot mode on newer series of Dell computers, you will be unable to boot to internal boot devices (including hard drive, SSD, or eMMC storage devices). This issue may also occur after installing the operating system in Legacy Boot mode. A message to this effect appears in the system BIOS under the General > Boot Sequence settings (Figure 1): 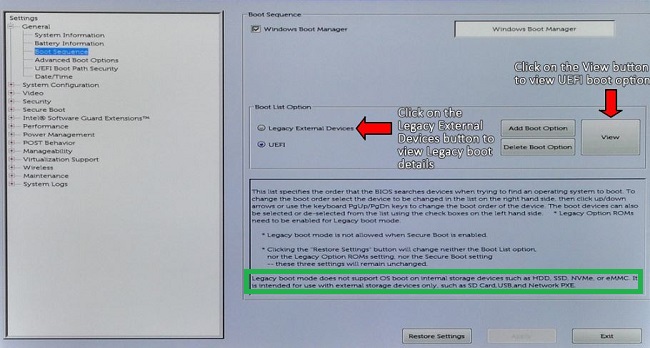 Use UEFI instead of Legacy boot mode on newer series Dell computers to boot to internal boot device.

If the highlighted message in Figure 1 is missing from the Boot Sequence page. Update the BIOS to the latest available version at Dell Support Site.
If the Legacy External Devices setting is missing from the Boot Sequence settings. Update the BIOS.
Select BIOS under the drop-down Category menu and download and install the latest available BIOS update. The Dell computer must be imaged in UEFI mode unless booting to an external boot device.

Note: Some newer computers will only support "UEFI." It will not include an option for Legacy at all even with the latest BIOS version installed. This is normal, and it is working as expected.