This article provides information about Intelligent Mirroring and Enhanced RAID 10.

A limitation of traditional RAID 10 configurations is that PERC controllers only support a maximum of 8 spans.  The primary RAID level in a RAID 10 array is RAID 1, and only two drives per RAID 1 are supported.  This effectively limits the maximum number of drives in a RAID 10 array to 16 drives (8 spans of 2 drives each).

Another consideration is the topology within an array.  Most commonly, a single RAID array is contained within a single enclosure or backplane.  For example, if a particular server has an internal 1x8 backplane, this would limit you to a maximum of 8 hard drives for any arrays created using drives on that backplane.

Some servers may have multiple backplanes allows a single controller to connect to multiple enclosures are the same time.  Also, it is possible that a single RAID controller may be connected to multiple external enclosures, greatly increasing the number of physical hard drives available for configuration into arrays.

Users can be presented with a check box to select Intelligent Mirroring when creating an array using an Systems Management Tools and Documentation (SMTD) to install an Operating System, or it can be an option within OpenManage Server Administrator (OMSA) when using the Advanced Wizard to create a new virtual disk.  Intelligent Mirroring is intended to allow selecting a group, or several groups of drives for use in the array, and the controller will determine which drives get mirrored to which drives.  For example, selecting 8 drives for use in a RAID 10 array, and using Intelligent Mirroring, the controller will determine how the drives are paired.

Intelligent Mirroring will enhance topology redundancy by creating mirrors across connectors on the RAID controller.  With drives 0, 1, 2, and 3 on connector 0 of a PERC controller, and drives 4, 5, 6, and 7 on connector 1 of the same controller, intelligent mirroring would likely pair drives in the following manner:  0 - 4 |  1 - 5 | 2 - 6 | 3 - 7 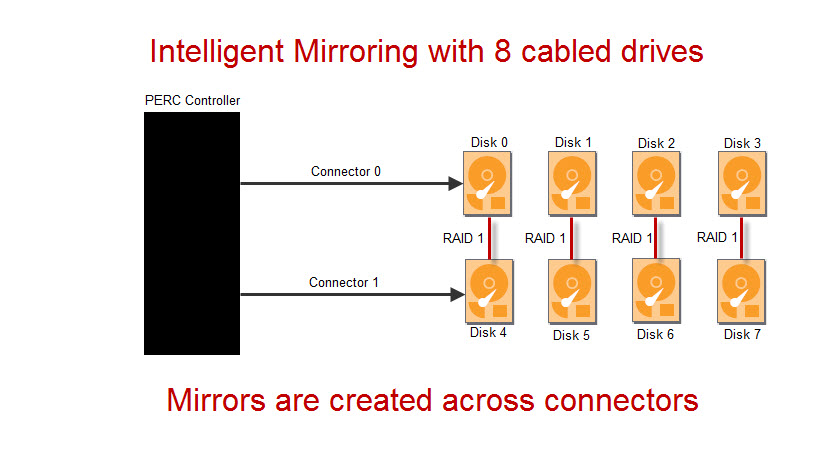 This pairing provides additional redundancy in the event of a problem related to a single connector, such as a bad cable.  A failed or disconnected cable attached to connector 0 would allow the array would remain up and running, provided that all the drives on connector 1 are online.  In the event of a single cable or connector failure, or even the loss of an entire enclosure, the array can remain in production in a degraded state.  The order of preference that the drives will be paired into mirrors is:

Enhanced RAID 10 arrays are essentially the same as a RAID 10 arrays, except for one key difference, SPAN LENGTH.  Span length is a means to increasing the number of drives in a RAID 1 array from 2 drives up to a maximum of 32 drives.  There must be an even number of drives, and the total space available is still 50% of the total drive space.  With a span length of 32 drives, there would effectively be 16 RAID 1 arrays within a single span.  Each drive is paired off with another drive in that span.  Additionally, when making a large RAID 1 array, you must have at least two spans (up to a maximum of 8 spans)  for use in the RAID 10 array to be created.  So if you choose a span length of 32, you must have at least 64 drives to create the RAID 10 array.  Each span containing 32 drives.  This allows for a maximum of 144 drives (32 drives x 8 spans)  in a RAID 10 array.  This feature has been supported since the 6.1 FW release of the PERC 6 controller, and on all newer PERC controllers.

There are a couple of notable exceptions.  When using 22 drives or 26 drives you can create a RAID 10 array using a single span of drives.  For example, you can configured the PDs per span to 22 and select 22 drives and create the array.  Striping is used to connect the mirrored pairs within the span.

Also be aware that there will not be any meaningful performance benefit based on the number of spans or the number of drives contained within each span.  The enhancement is primarily the ability to perform mapping to a larger number of drives.  Combined with Intelligent Mirroring, you can plan and implement a very large number of drives in a RAID 10 array which would be extremely reliable.

Below are a couple of pictures to illustrate the basic idea for RAID 10 and Enhanced RAID 10.  The main thing to remember is that they are the same in terms of space, redundancy and performance.  Just the mapping and RAID logic is different to allow for a larger number of drives and enclosures.

For example, in Figure 3 below, the mapping indicates that there are two RAID 0 stripes.  In fact, there is only a single stripe and the figure represent the logic for mapping from the OS volume down to the physical drives.  In terms of performance, striping does not directly reflect a performance increase.  Striping connects multiple hard drives together which, operating concurrently, does provide additional performance. 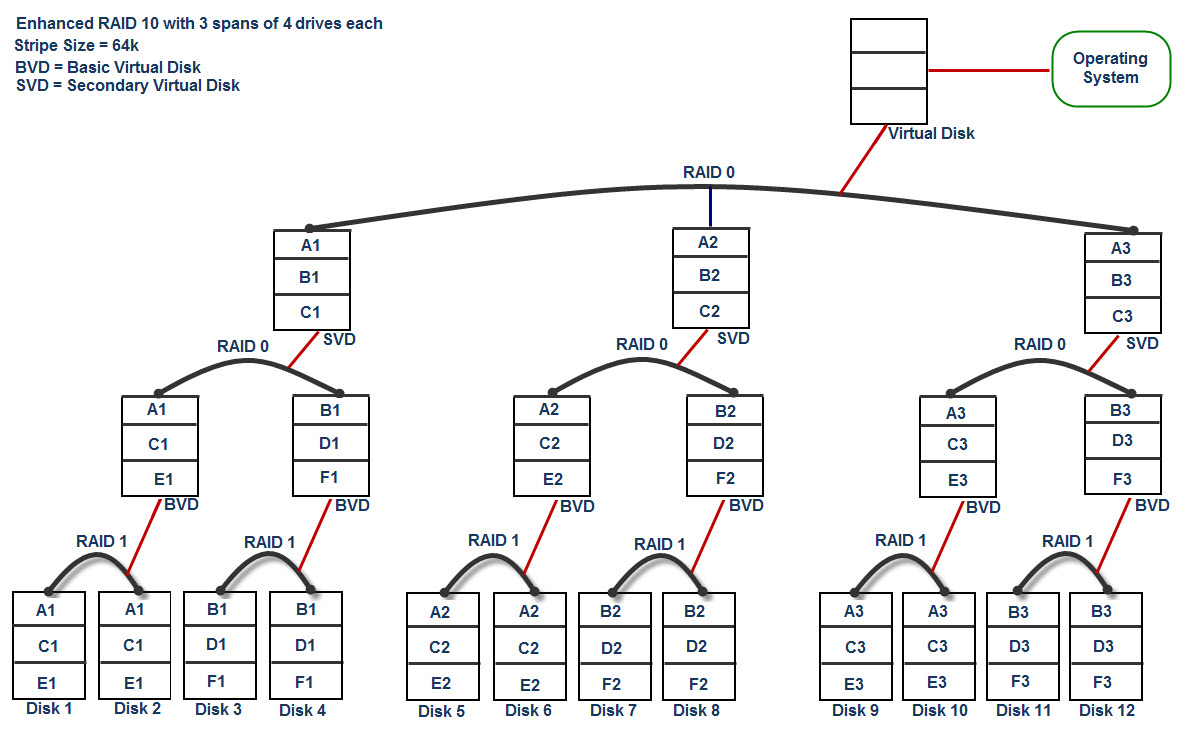