The HPC and AI Innovation Lab has a new cluster with 32 AMD EPYC based systems interconnected with Mellanox EDR InfiniBand. As always, we are conducting performance evaluations on our latest cluster and wanted to share results. This blog covers memory bandwidth results from STREAM, HPL, InfiniBand micro-benchmark performance for latency and bandwidth, and WRF results from its benchmark datasets.

We are interested in real-world HPC application performance on EPYC. If you have datasets you wish to try on EPYC, do get in touch with your Dell account team for access to the Innovation Lab.

AMD EPYC processors support eight memory channels, up to 16 dual in-line memory modules (DIMMs) per socket with two DIMMs per channel, and up to 32 cores per socket. Additionally, a platform with AMD CPUs provides up to 128 PCI-E lanes for peripherals like GPUs and NVMe drives.
The CPUs themselves are multi-chip modules assembled from four dies. Each die includes up to eight Zen cores, two DDR4 memory channels and 32 IO lanes. The Zen cores on a die are arranged in two groups of four with each group of four cores, called a core complex, sharing L3 cache. Within a socket, all four dies are cross connected via a coherent interconnect called Infinity Fabric. This is shown in Figure 1.

Figure 1 – EPYC Socket layout. CCX is a core complex of up to 4 cores that share L3 cache. M* are the memory channels, two channels handled by each die. P* and G* are IO lanes. ∞ is the Infinity Fabric. 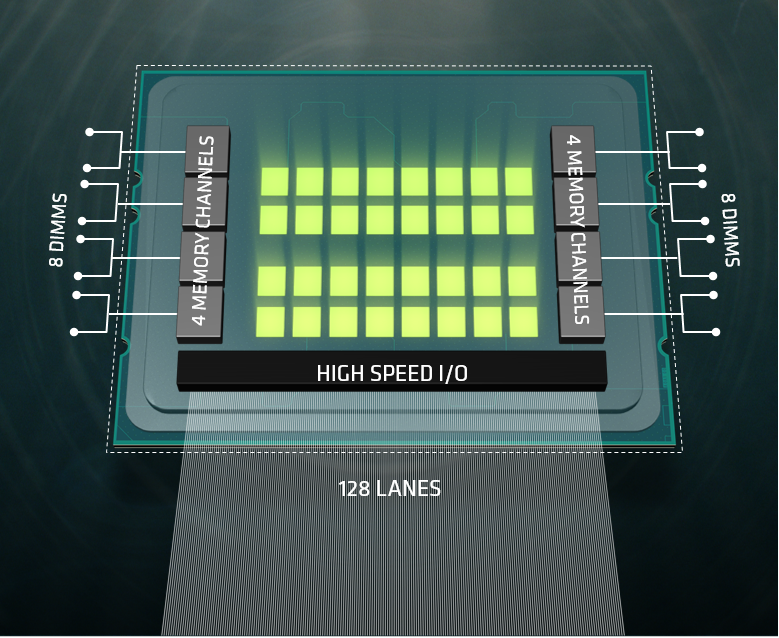 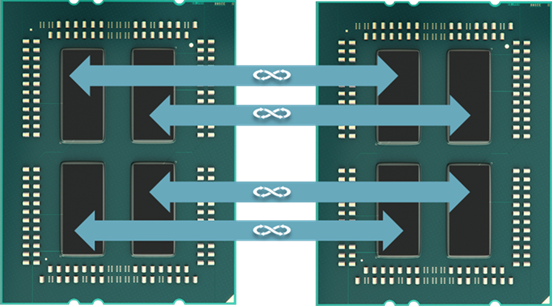 The non-uniform memory access (NUMA) presentation of EPYC can be controlled by a BIOS option called "Memory Interleaving" and mapped using Linux utilities such as numactl and lstopo.

The default Memory Interleaving option is "Memory Channel Interleaving". In this mode, the two channels of each die are interleaved. This presents four NUMA nodes per socket and eight NUMA nodes to the operating system on a 2S system.

"Memory Die Interleaving" is an option where memory across all four dies on a socket, i.e. eight memory channels, are interleaved. This presents one NUMA node per socket and two NUMA nodes on a 2S system.

"Memory Socket Interleaving" interleaves memory across both sockets giving one NUMA node on a 2S platform. This would be the equivalent of NUMA disabled. 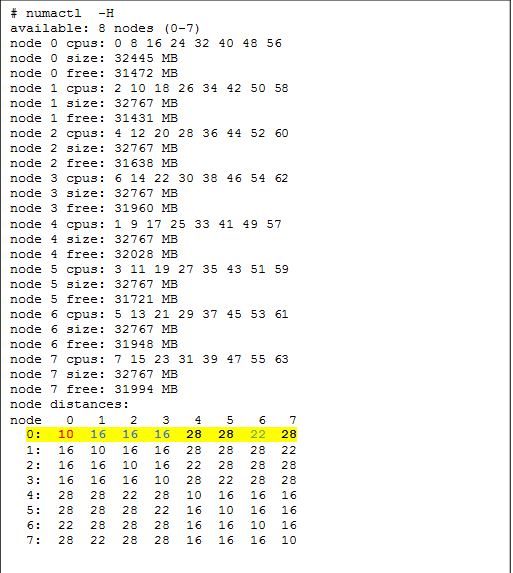 Some BIOS implementations and versions may simplify this physical layout and present only three NUMA distances to the Operating System. This simplification involves masking the difference in distance between NUMA node 0 (as an example) and NUMA nodes 4,5,6,7 by presenting NUMA nodes 4,5,6,7 as equidistant from NUMA node 0. Such an implementation is shown in Figure 5. The NUMA layout will be a tunable option in the next release of the PowerEdge R7425 BIOS. Simplifying the NUMA node distances does not change the actual physical layout of the cores, it is primarily for the benefit of the OS scheduler. For HPC and MPI jobs that are NUMA aware, these different presentations should be immaterial. 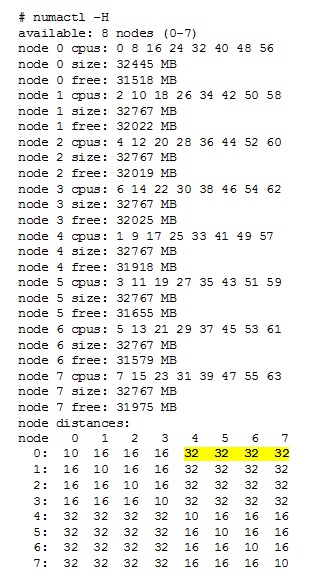 
In addition to the 8 NUMA nodes on a two-socket platform, Figure 4 and Figure 5 also show the memory and cores associated with each NUMA node. Each NUMA node has 32GB of memory from two 16GB DIMMs (16 DIMMs in the server, eight per socket, 1 DIMM per channel). Each NUMA node contains the eight cores of the local die. The core enumeration on the Dell EMC platform is round robin, going across all NUMA nodes first and then filling each NUMA node.

Additionally, lstopo output can be used to clearly show which set of four cores make up a core complex. These are the four cores on a die that share L3 cache. For example, Figure 6 shows that NUMA node 0 has eight cores and on this NUMA node cores 0, 16, 32, 48 share L3 cache, and cores 8, 24, 40, 56 share L3 cache.

The 2S platform memory bandwidth is impressive, 240-260GB/s, and is a result of the eight memory channels per socket on the platform. Even more so, a single core can provide ~24.5 GB/s of memory bandwidth to local memory which is great for the single-threaded portion of applications.

Looking at the impact of the NUMA layout on remote memory access, Figure 8 plots the relative memory bandwidth when cores access memory that is not in the same NUMA domain. Access to memory on the same socket is ~30% slower, access to memory on the other socket is ~65% slower. Using STREAM Triad, there seems to be no measurable impact on memory bandwidth when accessing memory on the remote socket over one hop (node6, 1 Infinity Fabric between sockets) or two hops (node4,5,7 - 1 Infinity fabric hop between sockets + 1 local Infinity Fabric hop). For memory bandwidth sensitive applications, good memory locality will be important to performance even within the same socket. 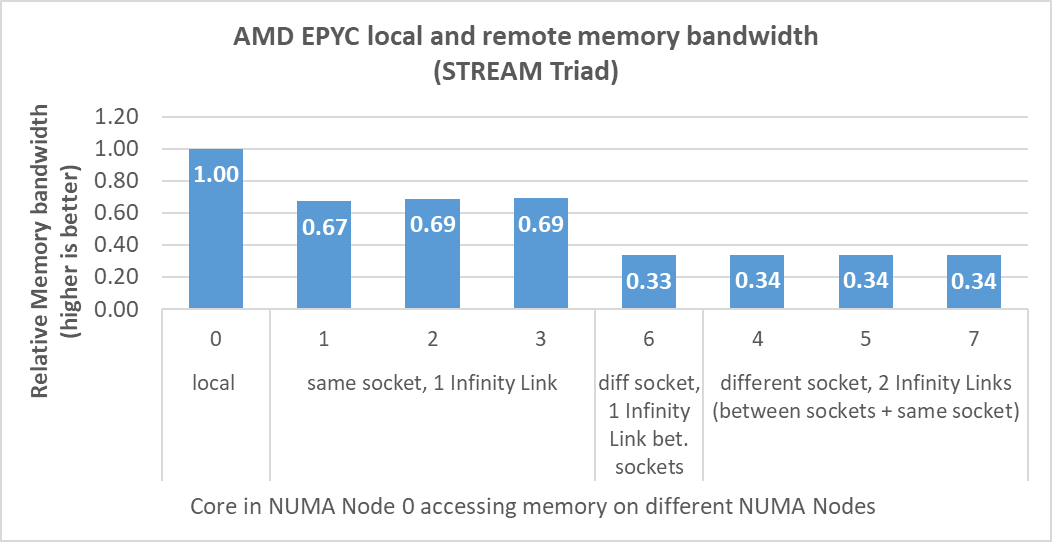 Next, we measured the computational capability of EPYC as measured by the HPL benchmark. EPYC can support AVX instructions and performance 8 FLOP/cycle. On our platform, we used Open MPI and the BLIS linear algebra libraries to run HPL.

The efficiency is over 100% is because EPYC is able to sustain turbo frequencies above base frequency during the duration of the HPL test.

Care was taken to pin the MPI process to the NUMA node that is closest to the HCA. This information is available in the lstopo output, and in our case it was NUMA node 6. Latency tests were run with both OpenMPI and HPC-X. With OpenMPI & MXM acceleration we measured latency of 1.17µs, with OpenMPI & UCX we measured latency of 1.10µs. The latency results obtained with HPC-X are presented here. 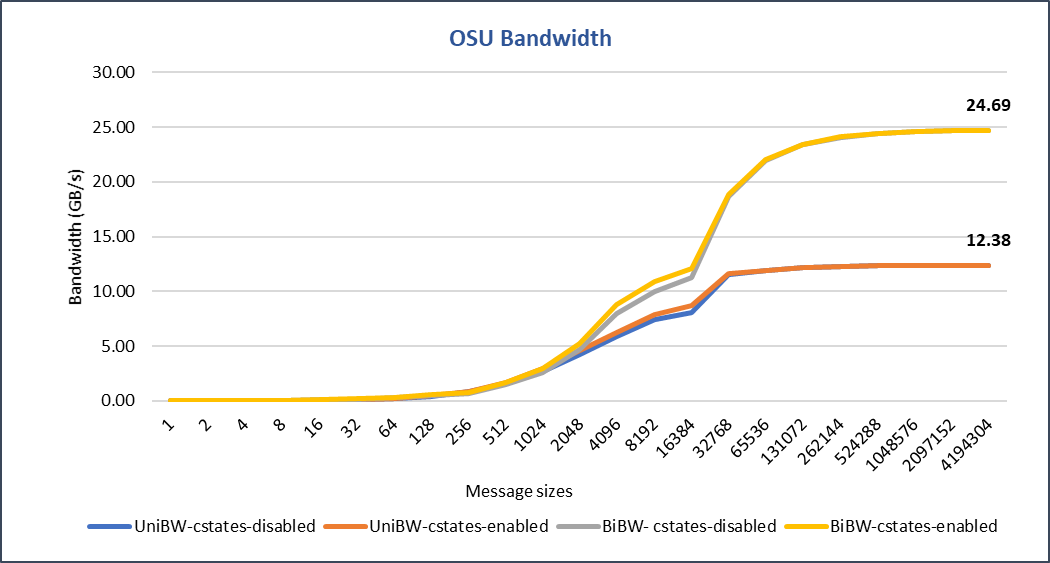 
The NUMA layout described in Figure 3 and Figure 6 prompted us to check the impact of process locality on the bandwidth. For this test we used the osu_mbw_mr benchmark that measures aggregate uni-directional bandwidth between multiple pairs of processes. The objective of this test is to determine the achieved bandwidth and message rate between individual NUMA nodes using all eight cores on the NUMA node. The results of this test are presented in Table 2. The test configuration used Performance profile (C-states disabled and Turbo enabled).

To double check this last result, we ran a test using all 8 NUMA nodes across both sockets with each NUMA node running 2 processes giving a total of 16 processes per server. With this layout we measured 2.9 GB/s as well.

These results indicate that the topology of the system has an effect on communication performance. This is of interest for cases where an all-to-all communication pattern with multiple processes communicating across servers is an important factor. For other applications, it is possible that the reduced bandwidth measured when running processes on multiple NUMA domains may not be a factor that influences application-level performance.

With our InfiniBand fabric performance validated, the next test was to quickly run HPL across the cluster. These tests were performed on a 16-node system with dual socket EPYC 7601. Results are in Figure 11 and show the expected HPL scalability across the 16 systems.

We used WRF v3.8.1 and v3.9.1 and tested the conus 12km and conus 2.5km data sets. We compiled WRF and netcdf using Intel compilers and ran with Intel MPI. We tried different process and tiling schemes, using both dmpar as well as the dm+sm configuration option with OpenMP.

We are working with AMD to determine other compiler tuning options for WRF.

There was no measured performance difference between WRF v3.8.1 and v3.9.1. Comparing dmpar and dm+sm, a judicious combination of processes and tiles resulted in about the same performance. This is shown in Figure 12.

Cluster level tests were conducted with WRV v3.8.1 and the dmpar configuration using all the cores and 8 tiles per run.

Conclusion and next steps

EPYC provides good memory bandwidth and core density per socket. From an HPC standpoint, we expect applications that can make use of the available memory bandwidth and CPU cores to be able to take most advantage of the EPYC architecture. EPYC today does not support AVX512, or AVX2 in a single cycle, so codes that are highly vectorized and can use AVX2 or AVX512 efficiently may not be ideal for EPYC.

Use cases that can utilize multiple NVMe drives may also benefit from the direct attached NVMe that is possible due to the number of PCI-E lanes on EPYC.

Our next steps include further performance tests with additional HPC applications.