Dell Servers - What are the RAID levels and their specifications?

RAID is a data storage virtualization technology that combines multiple physical disk drive components into a single logical unit for the purposes of data redundancy, performance improvement, or both.

Data is distributed across the drives in one of several ways, referred to as RAID levels, depending on the required level of redundancy and performance. The different schemas, or data distribution layouts, are named by the word RAID followed by a number, for example RAID 0 or RAID 1. Each schema, or RAID level, provides a different balance among the key goals:
reliability, availability, performance, and capacity.

With RAID 1, data written to one disk is simultaneously written to another disk. If one disk fails, the contents of the other disk can be used to run the system and rebuild the failed physical disk.
The primary advantage of RAID 1 is that it provides 100 percent data redundancy. Because the contents of the disk are completely written to a second disk, the system can sustain the failure of one disk. Both disks contain the same data at all times. Either physical disk can act as the operational physical disk (Figure 2 (English only)). 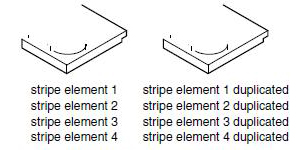 RAID 5 and 6: Parity Data is redundant data that is generated to provide fault tolerance within certain RAID levels. In the event of a drive failure the parity data can be used by the controller to regenerate user data.
Parity data is present for RAID 5, 6, 50, and 60. The parity data is distributed across all the physical disks in the system. If a single physical disk fails, it can be rebuilt from the parity and the data on the remaining physical disks.
RAID 5

RAID 10: RAID 10 requires two or more mirrored sets working together. Multiple RAID 1 sets are combined to form a single array. Data is striped across all mirrored drives.
Since each drive is mirrored in RAID 10, no delay is encountered because no parity calculation is done.
This RAID strategy can tolerate the loss of multiple drives as long as two drives of the same mirrored pair do not fail. RAID 10 volumes provide high data throughput and complete data redundancy (Figure 5 (English only)).

a. Introduction to RAID Concepts