System memory holds the instructions that are executed by the processor. Learn how to find supported memory configuration for your PowerEdge server.

What memory configuration is supported on my PowerEdge server?

Each Dell server has different types of memory and configurations. Refer to the Owner's manual for detailed information about the memory your server can support.
To check the manual of your Dell Server visit Dell.com/Support

1. Enter the Service Tag of your server.

4. Search for the menu Installing and removing system components > "Memory" or "System Memory"

5. You find detailed information about the memory configuration for your dell server.

Displayed language can be changed in the top section. 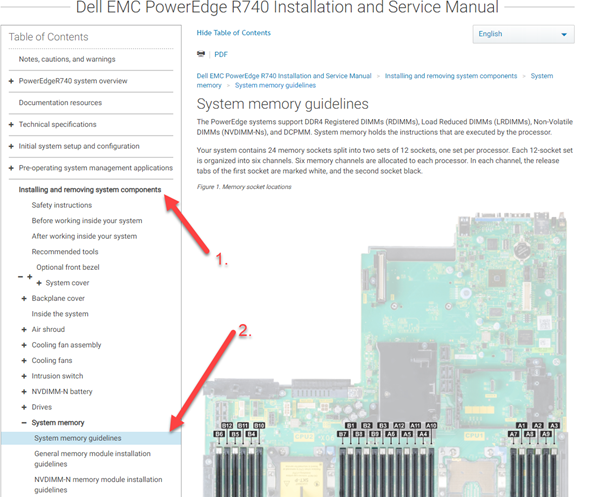 In that case, we can read that the R740 supports DDR4 Registered DIMMs (RDIMMs), Load Reduced DIMMs (LRDIMMs), Non-Volatile DIMMs (NVDIMM-Ns), and DCPMM. System memory holds the instructions that are executed by the processor. All other memory information is located in this place.

Shipped Memory on my PowerEdge Server

To check the current memory in your Dell Server visit dell.com/Support

1. Enter the Service Tag of your server.

3. Locate the memory that was shipped with your Dell Server from the configuration list.

What are the different types of memory DIMMS for Dell PowerEdge servers.

Their several types of memory DIMMS for servers available:

RDIMMs, by buffering and registering the address, control, and clock lines, removes loads from the system memory bus and isolates these to the well-defined signal paths on the DIMM itself. While this register introduces some latency to buffer these signals, the pipelined nature of the memory allows full speed access once the transfer begins. Rather than having eight or sixteen loads on these signals, the system memory bus only sees one load, that of the register. However, the data I/O signals on an RDIMM remain connected directly between the connector and the individual DRAMs (up to four loads on a 4-rank DIMM).

LRDIMMs are a new technology, introduced on the PowerEdge 12th generation servers. LRDIMMs buffer the data I/O signals between the DRAMs and the system memory bus by using a buffer device.

NVDIMM-Ns Persistent Memory is a disruptive Storage Class Memory technology that enables unprecedented performance improvement over legacy storage technologies. Each NVDIMM-N provides 16 GB of nonvolatile memory and has the same form factor as a standard 288-Pin DDR4 DIMM. The NVDIMM-N resides in a standard CPU memory slot, placing data close the processor. With its ability to operate at 2666MT/s DDR4 data rates. The NVDIMM-N takes full advantage of the high bandwidth and low latency that is characteristic of the memory bus. For comparison, the table below provides approximate data access times for DDR4 relative to other server storage media.

DCPMMs persistence and capacity of data storage of a solid-state drive. This means the DCPMMs have performance characteristics similar to that of TruDDR4 DIMMs. The storage capacity of an SSD, and the ability to stay active after a power cycle or reboot of the server. These features open up a new way of performing data I/O to application developers and new levels of server performance.

Note: Do not confuse LRDIMMS with LV-DIMMS, as LV stands for Low Voltage.