Cascade Lake and its predecessor Skylake include a feature called ADDDC (Adaptive Double DRAM Device Correction). ADDDC is deployed at runtime to dynamically map out failing DRAM devices while continuing to provide Single Device Data Correction (SDDC), Error-correcting code (ECC) memory, translating to increased DIMM longevity. This feature is activated only for x4 DRAM devices and does nothing when there are x8 DRAM devices in the system. Since the latest NSS-HA version 7.4 uses only the 16GB memory, which is x8 organization, ADDDC is greyed out and is not a tunable option in the BIOS. However, if you are using 32GB memory which is x4, then ADDDC will be available as a tunable option and it is recommended to be set to disabled to favor performance over the RAS features.

It is recommended to configure the NFS servers with the HPC profile as described in the blog  "BIOS characterization for Intel Cascade Lake processors" This includes tuning the BIOS to set Sub-NUMA cluster enabled, logical processor disabled, and system profile set to "Performance". If upgrading an existing system, ensure the BIOS is first updated to a version that supports Cascade Lake CPUs before upgrading the CPUs to Cascade Lake processors. The latest iDRAC firmware is also recommended.

The HPC Engineering team at the HPC and AI Innovation Lab, performed a series of benchmark tests with NSS servers equipped with Cascade Lake processors and compared the results, to those, previously obtained from NSS7.3-HA solution, which used the latest version of PowerEdge servers equipped with the previous generation "Skylake-SP" Xeon family processors. The benchmark results and the comparison are presented in this blog.

The NFS storage solution provided by Dell EMC is optimized and tuned for best performance.  While setting up the NSS7.4-HA solution., the following salient points should be noted:

Figure 1 shows the design of NSS7.4-HA. Except for necessary software and firmware updates, NSS7.4-HA and NSS7.3-HA share the same HA cluster configuration and storage configuration. The pair of NFS servers in active-passive high availability configuration are attached to the PowerVault ME4084. There are dual SAS cards in each NFS server. Each card has a SAS cable to each controller in the shared storage, so that a single SAS card or SAS cable failure does not impact the data availability. (Refer to NSS7.3-HA white paper for more detailed information about the configuration). 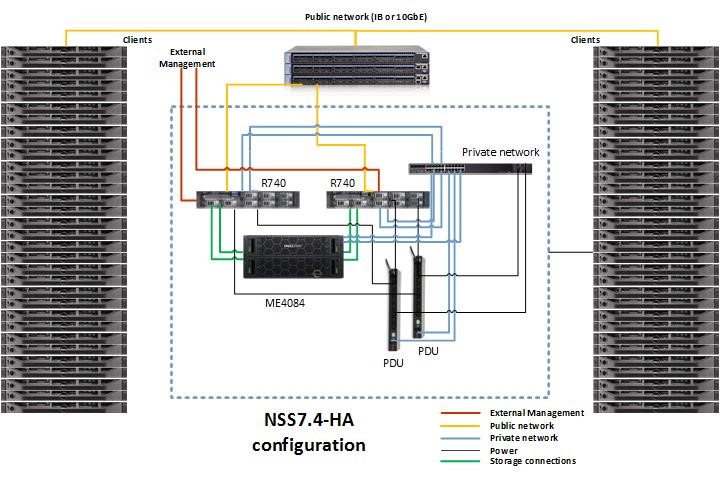 Although Dell NSS-HA solutions have received many hardware and software upgrades to offer higher availability, higher performance, and larger storage capacity since the first NSS-HA release, the architectural design and deployment guidelines of the NSS-HA solution family remain unchanged. This latest version and the earlier version, NSS7.3-HA share the same storage backend which is Power Vault ME4084. The following table provides a comparison of the components in  the latest NSS7.4-HA solution and the earlier NSS7.3-HA solution


In the rest of the blog, the test bed and the I/O performance information of NSS7.4-HA will be presented. To show the performance difference between NSS7.4-HA and the previous release, the corresponding performance numbers of NSS7.3-HA are also presented.

The testbed used to evaluate the performance and functionality of the NSS7.4-HA solution is described here. Note that the CPUs used for performance testing are different from that selected for the solution since the Xeon Gold 6240 CPUs were not received on time for this work. The plan is to repeat some of the testing once the 6240 processors are available and amend this report as needed.

This section presents the results of the I/O performance tests for the current NSS7.4 solution. All performance tests were conducted in a failure-free scenario to measure the maximum capability of the solution. The tests focused on three types of I/O patterns: large sequential reads and writes, small random reads and writes, and three metadata operations (file create, stat, and remove). Like the previous version NSS7.3-HA, the solution uses deadline I/O scheduler, and 256 NFS daemons.

An 840TB (raw storage size) configuration was benchmarked with IPoIB network connectivity over EDR. A 32-node compute cluster was used to generate workload for the benchmarking tests. Each test was run over a range of clients to test the scalability of the solution.

The IOzone and mdtest benchmarks were used in this study. IOzone was used for the sequential and random tests. For sequential tests, a request size of 1024KiB was used. The total amount of data transferred was 2TB to ensure that the NFS server cache was saturated. Random tests used a 4KiB request size and each client read and wrote a 4GiB file. Metadata tests were performed using the mdtest benchmark with OpenMPI and included file create, stat, and remove operations. (Refer to Appendix A of the NSS7.3-HA white paper for the complete commands used in the tests.)

To evaluate sequential reads and writes the IOzone benchmark, version 3.487, was used in the sequential read and write mode. These tests were conducted on multiple thread counts starting at 1 thread and increasing in powers of 2, up to 64 threads. At each thread count an equal number of files were generated, since this test works on one file per thread or the N-N case. An aggregate file size of 2TB has been selected, which is equally divided among the number of threads within any given test. 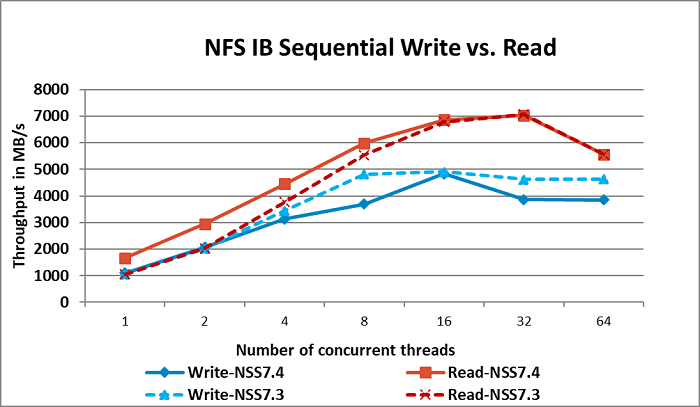 To evaluate random IO performance, IOzone version 3.487 was used in the random mode. Tests were conducted on thread counts starting from 1 up to 64 in powers of 2. Record size was chosen to be 4KB. Each client read or wrote a 4GiB file to simulate small random data accesses.  Since the cluster had only 32 nodes, the 64-thread data point was obtained with 32 clients running 2 threads each. 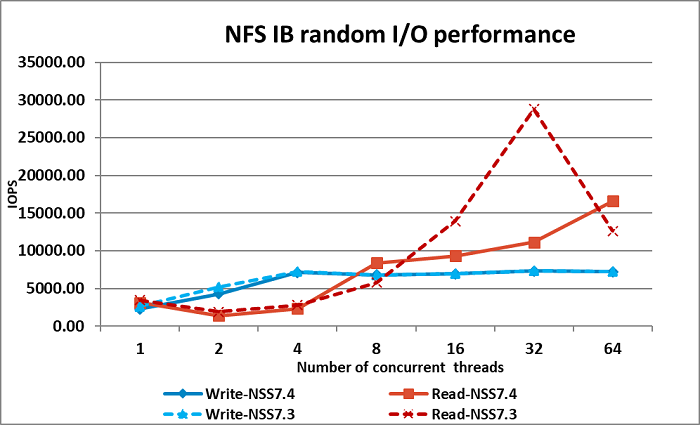 To evaluate the metadata performance of the system, MDTest tool version 1.9.3 has been used. The MPI distribution used was OpenMPI version 1.10.7.  The metadata tests were performed by creating 960000 files for thread count up to 32 and then increasing the number of files, to test the scalability of solution as tabulated in Table5.

Table 5: Metadata Tests: Distribution of files and directories across threads

Figure 4, Figure 5, and Figure 6 show respectively the results of file create, stat, and remove operations. As the HPC compute cluster has 32 compute nodes, in the graphs below, each client executed a maximum of one thread per node for counts up to 32. For client counts of 64, 128, 256, and 512, each node executed 2, 4, 8, or 16 simultaneous operations.
On file creates, there is a 20% improvement in performance up to 16 threads and from 32 threads onwards, the performance of both the versions is almost similar.
Stat operations in NSS7.4 registered a 10% improvement in performance for the lower thread counts (1,2, 8 and 16) and a >30% decrease in performance at higher thread counts (from 64 threads to 512 threads).
Finally, remove operations had a 14% decrease in performance up to 64 clients and a >20% decrease for higher thread count of 128,256 and 512.

The following table summarizes the performance difference observed between the last NSS7.4 and NSS7.3 solutions.

Table 5:  Comparision of performance of NSS7.4 and NSS7.3 HA versions

From the above results, we can conclude that the current NSS7.4-HA solution provides comparable performance with that of its predecessor NSS7.3-HA solution. We plan to run the benchmark tests with Xeon Gold 6240 CPUs with 18 cores per processor, to understand if the decrease in performance for random reads and the decrease in performance at higher thread counts in the file stat and file remove operations is attributable to the lesser number of cores used in the Xeon Gold 6244 CPUs (8 cores per processor) used for performance benchmarking the NSS7.4-HA solution.

For detailed information about NSS-HA solutions, please refer to our published white papers