The Dell EMC PowerEdge R740 is a 2-socket, 2U rack server. The system features Intel Skylake processors, up to 24 DIMMs, and up to 3 double width V100-PCIe or 4 single width T4 GPUs in x16 PCIe 3.0 slots. T4 is the GPU that uses NVIDIA’s latest Turing architecture. The specification differences of T4 and V100-PCIe GPU are listed in Table 1. MLPerf was chosen to evaluate the performance of T4 in deep learning training. MLPerf is a benchmarking tool that was assembled by a diverse group from academia and industry including Google, Baidu, Intel, AMD, Harvard, and Stanford etc., to measure the speed and performance of machine learning software and hardware. The initial released version is v0.5 and it covers model implementations in different machine learning domains including image classification, object detection and segmentation, machine translation and reinforcement learning. The summary of MLPerf benchmarks used for this evaluation is shown in Table 2. The ResNet-50 TensorFlow implementation from Google’s submission was used, and all other models’ implementations from NVIDIA’s submission were used. All benchmarks were run on bare-metal without a container. Table 3 lists the hardware and software used for the evaluation. The T4 performance with MLPerf benchmarks will be compared to V100-PCIe.

Table 1: The comparison between T4 and V100-PCIe

Table 2: The MLF Perf benchmarks used in the evaluation

Figure 1 shows the performance results of MLPerf on T4 and V100-PCIe on PowerEdge R740 server. Six benchmarks from MLPerf are included. For each benchmark, the end-to-end model training was performed to reach the target model accuracy defined by MLPerf committee. The training time in minutes was recorded for each benchmark. The following conclusions can be made based on these results: 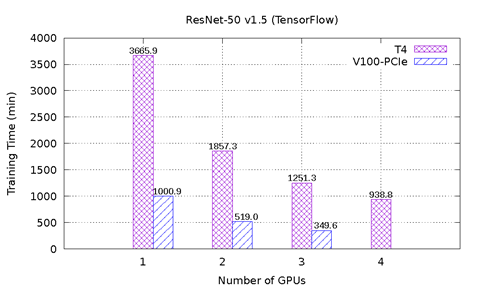 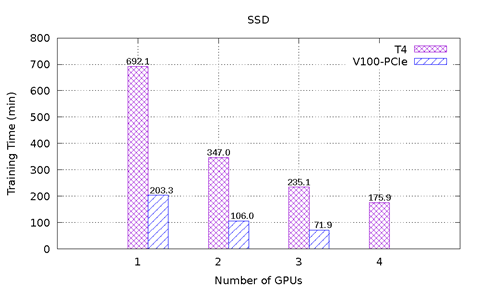 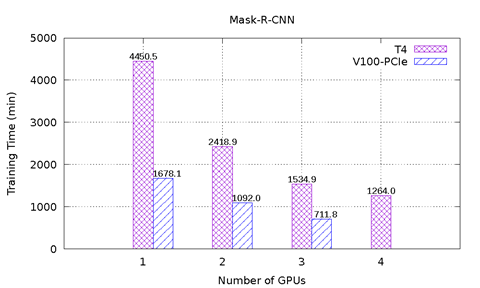 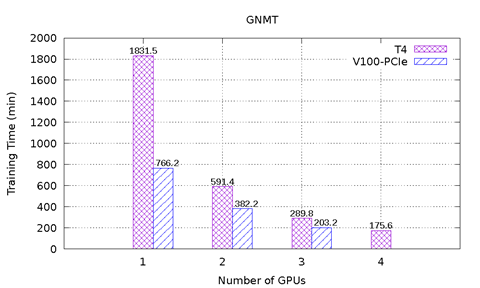 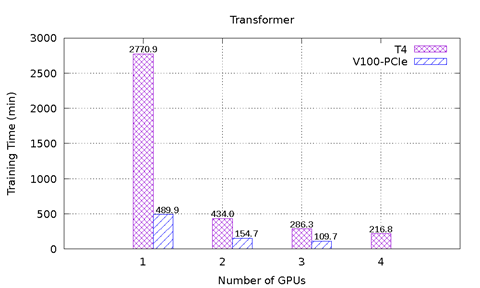 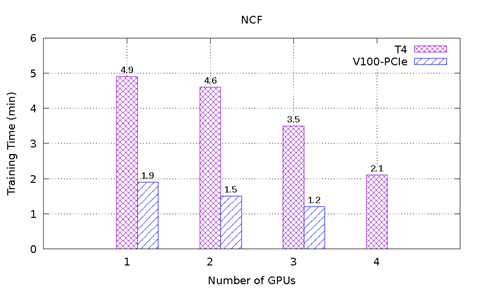 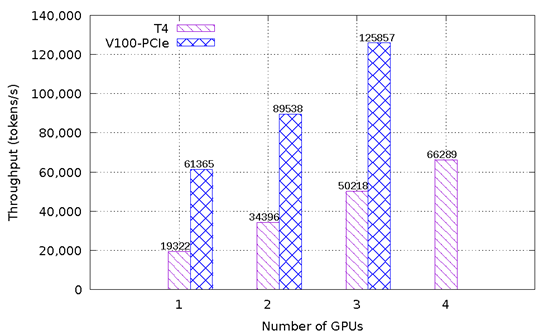 In this blog, we evaluated the performance of T4 GPUs on Dell EMC PowerEdge R740 server using various MLPerf benchmarks. The T4’s performance was compared to V100-PCIe using the same server and software. Overall, V100-PCIe is 2.2x – 3.6x faster than T4 depending on the characteristics of each benchmark. One observation is that some models are stable no matter what random seed values are used, but other models including GNMT, NCF and Transformer are highly impacted by random seed. In future work, we will finetune the hyper-parameters to make the unstable models converge with less epochs. We will also run MLPerf on more GPUs and more nodes to evaluate the scalability of those models on PowerEdge servers.